This week was a busy one at Better Homes and Gardens The Shanahan Group. One of the highlights was listing a lovely colonial at 22 Nelson Street in Winchester. It's a home with character and love that you can feel and a history that has been passed down through families and time. We asked its current owners for a glimpse into 22 Nelson Street and what makes this place so special.

From the owners of 22 Nelson Street, Winchester

22 Nelson Street was built in 1897 for the parents of Virginia Foreman. It was wallpapered in July of 1898 by Gene B. Farrowwe know this because he signed the west wall of the living room in pencil, and Gene B. Farrow writes big. The house was re-papered in the 1960s (more signatures in pencil), and painted in 2008 by the Olenn family, who also added their names to the houses history.
Virginia Foremangrew up in the house, and did laps around the basement on her bike. We know this because our friend Chriss mom grew up just around the corner and rode her tricycle with Virginia. In the strange cabinet under the basement stairs is a certificate of musical accomplishment from Virginias early years, though we dont know what form that accomplishment took.
In time Virginia married Lawrence Hutchings, aka Hutch, and the newlyweds moved into this house to take care of Virginias ailing mother. Lawrence spent his career working at Hanscom Air Force base, which we know from his silver retirement bowl. Hutch was known and loved by many in the neighborhood, often inviting people over for a cocktail on the porch, and was one of the founders of the Jenks senior center. Hutch and Virginia had their own children here, a son and a daughter. The son, Bruce, followed in his fathers footsteps and became a pilot and lives in New Hampshire. The daughter has a son of her own and lives in Hopkinton, though weve forgotten her name.
All this means that we were only the second family to live in this historic home, and now you are the third. It is a good home, and the spirit of Hutch seems to linger at opportune times, when doing a home improvement project and finding that a much-needed obscure jar of God-knows-what just happens to be at hand, left behind by the old man.
Be good to this place, and it will be good to you. 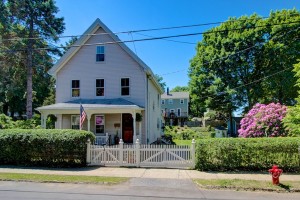 Come see 22 Nelson St at tomorrow's open house, Sunday June 8th. Karen Shanahan Garrett will be there from 11:30-1:00.
In the meantime, check out the video tour:22 Nelson Street, Winchester